Posts feature partner companies & may be sponsored. Post contains affiliate links & I will be compensated if you make a purchase after clicking on links. As an Amazon Associate I earn from qualifying purchases.

While I am out in the woods for a few days living on trail mix and granola bars I thought I would share a few of my past articles with you! Pray the tent doesn’t leak and the bugs don’t find me!

Think About This Thursday

What color are carrots? Simple enough question, right? You, like most of the world, would answer ‘Orange’. And yes, in today’s society you would be right 99% of the time. But,the first carrots were white, purple, red, yellow, green and black. Think about this: there were originally NO orange carrots!  So, what happened? How did we go from the thin, tough multicolored root that originated 5000 years ago in Afghanistan to the plump, 8 inch long bright orange veggies we see in the grocery store? 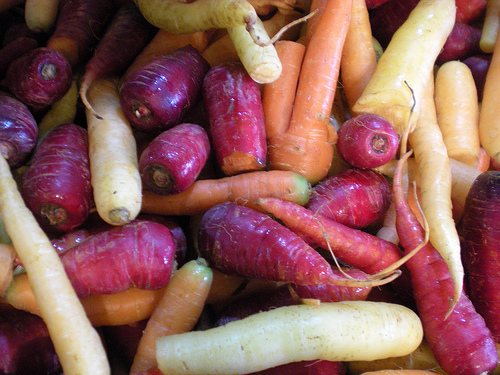 Or join the private Facebook group for simple tips on going green!

Carrots were carried via trade routes from Egypt (where purple carrots were apparently popular) to Greece and Rome (where they were thought to be an aphrodisiac!)  In the 13th century, early Europeans began cultivating carrots and they were popular as a medicinal treatment for everything from animal bites to syphilis. By the 16th century they were common across England and France (red, purple and yellow varieties…still no orange ones!).
Then, one day, the Dutch cross-bred the yellow and red carrot to produce a variety that would represent the House of Orange. Who would have thought that POLITICS could decide the color of our vegetables? The Carrot Museum reports that the carrot was introduced to America in 1609. (Am I the only one that is amazed to hear that there is a carrot museum?) It was then purposely cultivated to improve the flavor, texture, and nutritional value and the result is the fat, juicy, orange variety that is common today.
The carrot is the second most popular vegetable in the world after the potato. Several hundred varieties of carrot exist with over 50 different seeds available for planting. The ‘non traditional’ colors are finally starting to find their way back into farmer’s markets and health food stores. After four centuries of orange varieties, a cream colored carrot is beginning to appear in British shops. Purple carrots, which were almost completely lost in the shadows of it’s orange relative, are finally starting to make a comeback.
However, our obsession with the perfect, unblemished, orange carrot has had it’s own consequences. Heirloom varieties are disappearing at an alarming rate. My research turned up a very recent disappearance: the ‘Early Scarlet Horn’ carrots (three to four inch long, one and three-quarters inches in diameter,and  mild flavored) has recently been dropped from the heirloom seed directory because no sources can be found. How many other varieties will we lose, all because of our insistence that a carrot much be 8 inches long, skinny, and orange?
For those of you interested in helping save the multicolored carrots from certain disappearance, check out the Seed Savers Exchange. They are a non-profit organization of gardeners dedicated to saving and sharing heirloom seeds. Learn more about them and their mission!
And next time you are at the farmer’s market and see a purple carrot…bring it home and serve it to your kids! What a great way to get kids interested in their veggies!
References:
Halcyon
The Carrot Museum
In Depth Info
The Hungry Monster
Wikipedia

Diane is a professional blogger and nationally certified pharmacy technician at Good Pill Pharmacy.  She earned her BS in Microbiology at the University of New Hampshire and has worked in cancer research, academics, and biotechnology. Concern over the growing incidence of human disease and the birth of her children led her to begin living a more natural life. She quickly realized that the information she was learning along the way could be beneficial to many others and started blogging and freelance writing to share this knowledge with others. Learn more about her HERE.

Buy me a coffee

Hi! I’m Diane. I’m a busy mom of two college kids who’s trying to go green, get healthy and simplify life one step at a time.

We are a participant in the Amazon Services LLC Associates Program, an affiliate advertising program designed to provide a means for us to earn fees by linking to Amazon.com and affiliated sites.